From the thick soups to the meat-based dishes, Czech cuisine tends to entice the taste buds.

But what if you’re a vegetarian? What does the Czech Republic have to offer for vegetarians?

While pork, beef, and duck (Czech’s main meat products) are in most of Czech cuisine, there are other foods in the country that vegetarians can try, without missing out on the food culture.

So, if you’re looking for meatless cuisine in the Czech Republic, here are five dishes to try.

“The first thing that you’d want to try in the Czech Republic are the soups,” says Hector Ellis, a travel writer at 1 Day 2 write and Writemyx. “And if you’re a vegetarian, there’s good news. Traditional Czech soups tend to have large servings of vegetables in them, and can be filling with or without a main course.”

So, what would be the popular soup to try if you’re vegetarian?

“Kulajda is a popular starter in Czech cuisine,” adds Ellis. “It’s a dill soup that’s made with mushrooms, potatoes, and poached eggs, with dill as the garnish. The texture is thick and creamy, and can be enjoyed either during the summer or winter, depending on how Czechs want their mushrooms, since they love harvesting fungi in the outdoors.” 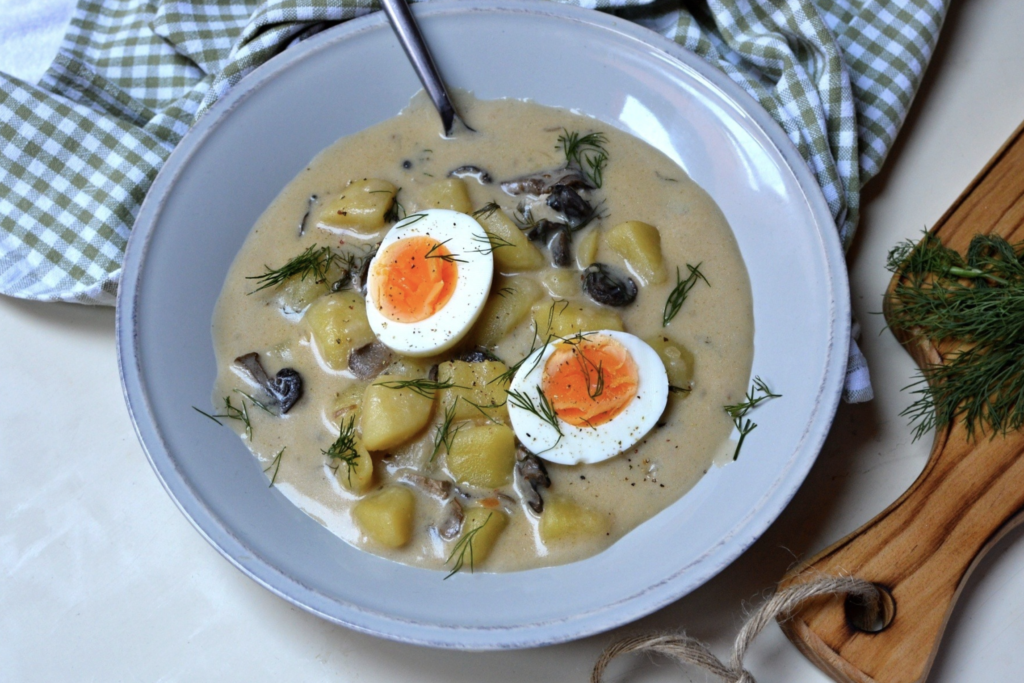 Czech potato pancakes (bramboráky) work as either a snack from street vendors, or a meal that can be enjoyed in a restaurant.

If you go to the food vendors, you’ll have the opportunity to watch them cook your food on the spot. Normally, these potatoes are grated before being mixed with flour and eggs, and then being fried until golden-brown.

Or, if restaurants are your thing, then you’re in luck. Normally, some restaurants offer two different versions of potato pancakes: ones stuffed with pork and cabbage, or a vegan version without the meat. 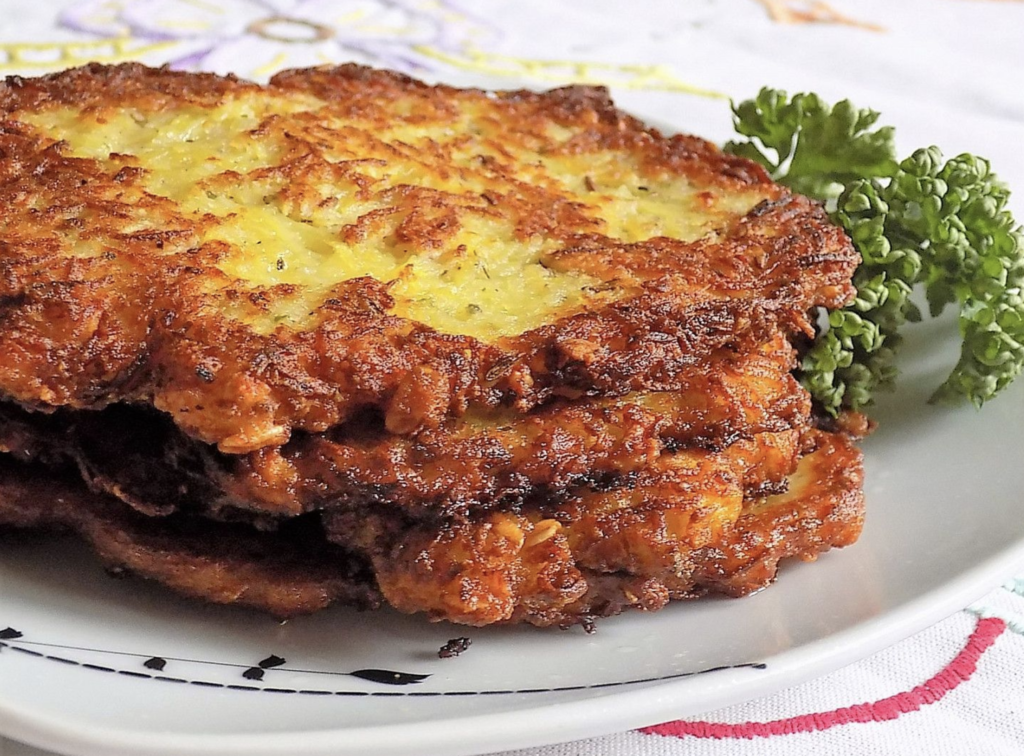 Bryndzové Halušky are potato dumplings that are normally stuffed with sheep cheese and bacon. It’s not only the national dish of Slovakia, but it’s also a staple food in all of Czech Republic. Usually, the gnocchi are served with things like smoked meat and cabbage; however, some restaurants serve vegetarian alternatives to this dish. In fact, the veggie gnocchi are stuffed with bryndza cheese and fried onion – a little different than the meat version, but still a good food option for vegetarians. 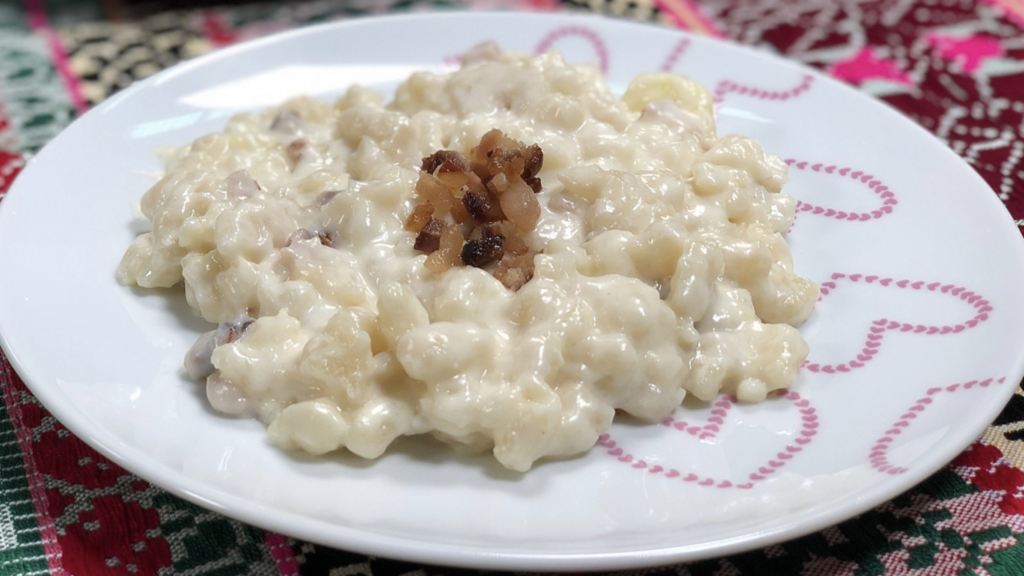 Smažák is a popular food item with local Czechs, which can be ordered as either an appetizer or the main course. Essentially, Smažák is fried cheese (more specifically a breaded block of either Hermelín or Edam cheese).

Smažák is a pretty good food item to buy, if you’re on the go, or travelling around Prague, or anywhere else in the Czech Republic. There are many food vendors who sell this food item, especially during lunchtime. And, it’s considered a comfort food to locals, especially since the “fried” aspect makes it a guilty pleasure (both tempting and unhealthy) to most people.

“Kuba is, and has always been, considered a simple meal with wild mushrooms,” says Abigail Elliott, a lifestyle blogger at Brit student and Next coursework. “In fact, it was a common dish that the poor would consume, because it was simple and affordable. It was also popular around Christmas time. And, it also helped people abstain from eating meat on certain religious days.”

Today, you’ll see Kuba being served in many restaurants, regardless of whoever eats it. And the good news for vegetarians? The dish is grain-based, and is served with dried mushrooms and various herbs and spices – basically barley with mushrooms. 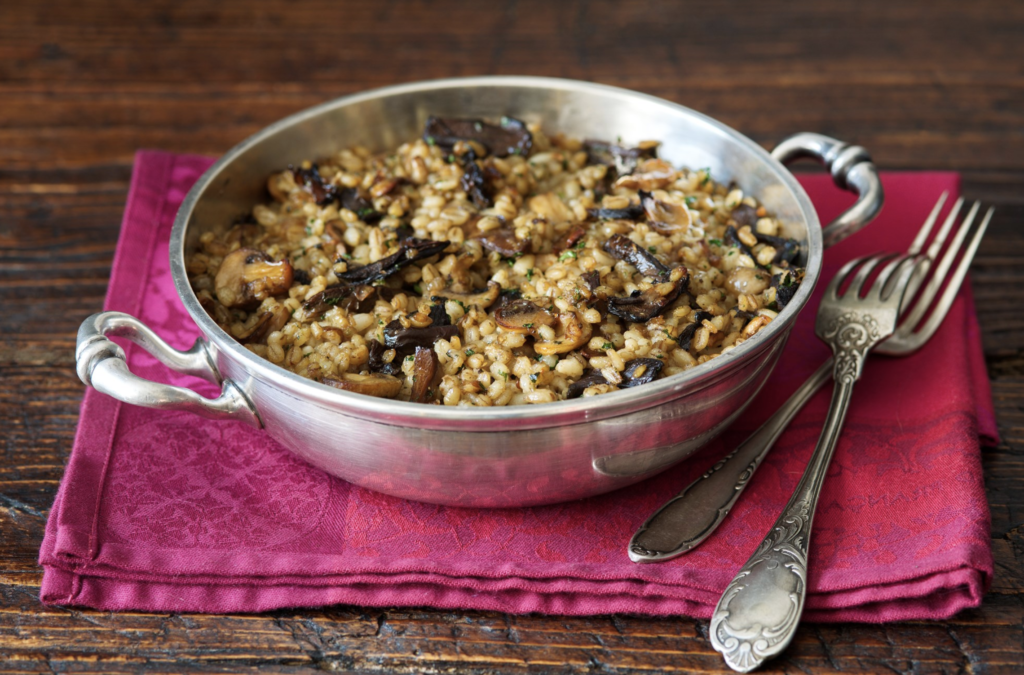 Although meat makes up most of the food culture in the Czech Republic, there are some alternatives for vegetarians to consider. So, if you’re looking for great food without compromising your vegetarian or vegan status, don’t be afraid to explore Czech cuisine and its abundance in veggie- and grain-based foods and restaurants that the country has to offer. So, come on and try these great foods with the vegetarian and vegan in mind!

Michael Dehoyos is a writer and editor at Thesis writing service and Write my research paper. He also contributes to numerous sites and publications like Origin Writings. As a content marketer, he helps companies improve their marketing strategies with helpful advice and tips.

Craving Some Georgian Food? Check It Out These Restaurants in Prague

Georgian cuisine contains various flavors, delicious dishes for vegetarians and meat-lover, and authentic wine with a unique and…

Prague Morning had the opportunity to interview the staff behind Caviar Club, a successful and local seafood distributor,…

We Searched for the Best Hot Dogs in Prague; Here What We Found Out

The notion of street food is gaining popularity and awareness in the streets of Prague: wherever you go,…

Where to Buy Halal Meat and Ready Meals in Prague

Who Has The Best Tacos In Prague?

Mexican cuisine is full of diverse flavors which can spice up your dinner and make it more extravagant!…

6 Places in Prague to Satisfy Your Sweet Tooth

If you have a sweet tooth, there’s no better time to be in Prague. Ice cream, donut, and…

Get the Scoop: 7 Best Ice Cream Shops in Prague

Summers in Prague can be oppressive with highs climbing to near 35 degrees Celsius on occasion. Especially in…

Everli, the European marketplace for online grocery shopping, is currently entering the Czech Republic’s market, after having operated…

Tiffins by Nebu is a new restaurant that serves modern Indian cuisine. Tiffins can be found in Makro…

The most popular alcoholic beverage in the Czech Republic is wine, beer comes in second place. According to…
Total
70
Share
70
0
0
0
0
0