Build a Tiny House and Plant a Tree Through DONE

Plant a tree, build a house and beget a son. This is the oldest traditional list of life achievements that every good man should achieve. Thanks to the latest project of the Czech studio DDAANN and Lukáš Otevřel, virtually anyone can uncheck the first two tasks, thus giving them the opportunity to fulfill their third mission.

Building your own house in the suburbs of a larger city can be very costly and up to many millions of crowns. Hence, post-construction is often accompanied by many compromises and concessions, making the resulting house not as comfortable as the owners originally imagined.

An increasing number of people, and in other places, living in these dwellings are forming their own communities. This phenomenon arrived in the Czech Republic quite recently and it is still in its very beginnings.

Tiny house can be a real style, evidenced by the latest domestic project called Tiny House DONE, which allows an owner to not only own housing but the possibility to build their own house, as well.

DONE is a minimalist prefabricated wooden building created by architects Daniel Baudis and Rohan from the DDAANN studio, who also teamed up with Lukáš Otevřel (creator and developer of his famous floating house project on the Vltava river named PORT X).

Lukáš spoke more about DONE and its requirements. “We wanted to create something minimalist, locally Czech and contemporary, with the ambition to extend this in the future [though]. The DONE concept was created with an emphasis on the practicality of use in today’s hectic times; own partial assistance in the construction and fulfillment of two parts of the life triad – that is, to build a house and plant a tree.”

The tiny house DONE provides a living room, kitchen, stove, and sink, shower with toilet, utility room and an outdoor terrace. The owners have available storage space, folding bed, and kitchen table with chairs, all in craftsmanship from the Czech company Devoto.

The house is currently offered in three variants: CORE, OFFGRID, and GLAMP, respectively. CORE is the basic habitable structure of the house without amenities such as heating, kitchen, shower or toilet. Owners can retrofit it by themselves, or it can serve as a shelter, farmhouse, etc. The cost is 365,000 CZK.

OFFGRID is equipped with a stove and a tank for imported water, which can be combined with collected rainwater. House energy is provided by either a smaller gel battery or system-combining solar panels with batteries that can be connected to a heat pump. With these suitable options, the house is fully self-sufficient and can long-stand. The price is 630,000 CZK without tax.

GLAMP, the most luxurious, comes with features such as ash kitchen with artificial stone countertop, storage space for longer stays, luxurious showerheads and taps, ash tiles, root purifier, pressurized water, and full network connectivity. Ash is also used for furniture equipment and seedlings of this tree. The price of the top version is 670,000 CZK excluding tax (possibility of deducting the same amount as the OFFGRID version, if you arrange transport and construction yourself).

“The most demand is for GLAMP, which is suitable to place somewhere where networks already [exist]. It can be a [family-extended] house, a special guest house – or for [a family’s] own privacy. It can [also] be used as a temporary building in the construction of something larger. GLAMP was built by our first client Jaroslav, as both electricity and water were already on the plot, and it made more sense for them to connect to local networks,” Otevřel added.

Houses are also abroad. Currently, Denmark has become the greatest interest in area for DONE.

One applies to the tiny house and is then placed on the waiting list after the deposit. The panels take about two months to process following transport and assembly the month after (length of time to deliver these depend on location).

Hopefully, in the future, sufficient inventory is made available for faster delivery and construction. 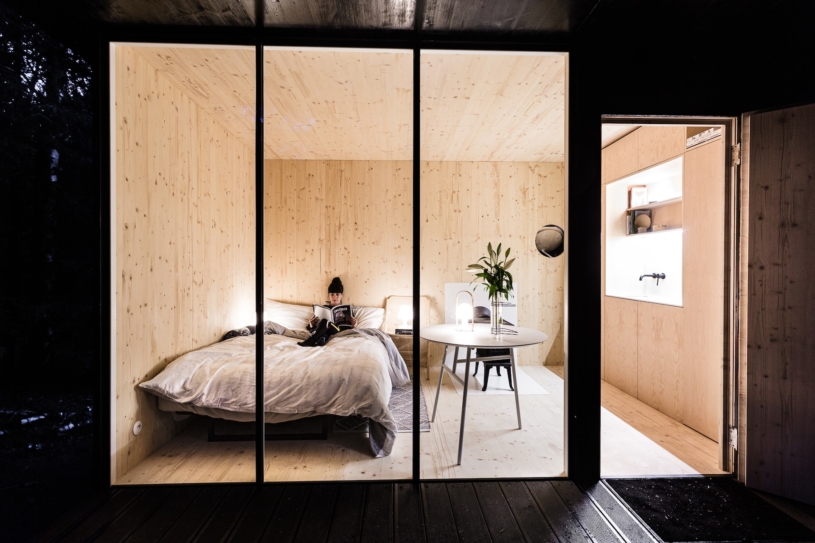 Are you constantly wondering where to go on a trip in Czechia? You don’t have to anymore –…

Wallenstein Garden Reopened to the Public

You Can Now Admire Last Remaining ‘Wild’ Horses in Prague 5

Virtual reality (VR) is becoming increasingly popular. At present, these catchy technologies are used, for example, for non-traditional…

For most who have been infected, as well as due to stress. In addition to the classic COVID-19…

The pandemic continues but it’s not a reason not to get out there from time to time. We’ve…

Rummage through trash cans, beg, steal, consort with criminals – do what it takes to survive the harsh…

6 Less-Crowded Parks for a Spring Stroll in Prague

Prague has many beautiful sights and parks around the metropolis. We’ve compiled a list of the ones that…

A chip, that simply and quickly detects coronavirus infection at an early stage, has been developed by Czech…