Coming Back, a movie about ex-lovers reuniting on a ranch looking for answers and trouble. A dark comedy starring David Tilšer and Myra Goldie, directed by Ivo Consi. Premiering September 4th, 20:00 at Kino Atlas, Prague.

What starts out as a seemingly romantic short film quickly takes a dark, comedic turn. Two rebels without a cause, American Mia and Czech Tom fall recklessly in love in their early twenties, exploring the boundaries of sex, and drugs, and love.

When Mia brought up the idea of starting a family, Tom couldn’t “comply” and after a massive drunken fight at the town bar, Tom woke to find Mia gone. That was the last time anyone saw her — until now. The movie begins with Mia unexpectedly showing up at the ranch, dropped off by her new husband under the guise of a class reunion, but she has darker intentions. 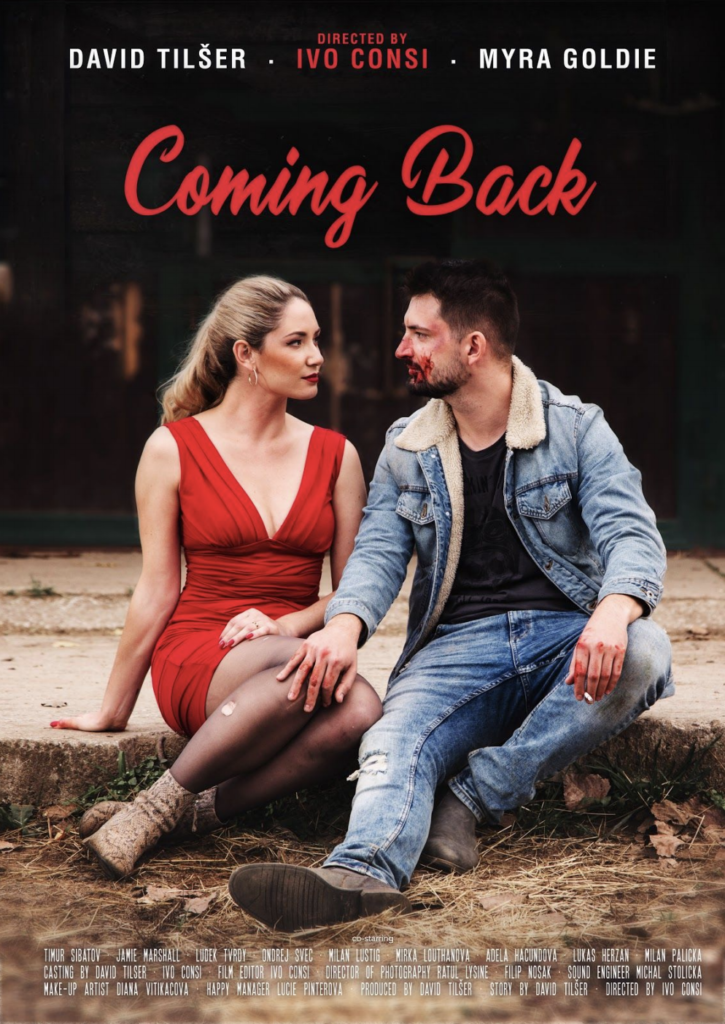 Once again, Tom finds himself in the midst of hurricane Mia as she searches for sex, drugs, and answers about the past. Will she find what she’s looking for? Director Ivo Consi says about the film, “Coming Back is a dark comedy with a real overlap of Czech and American styles. From capturing small, interesting figures, as Miloš Forman did in his first works, to small situations developing into bloody endings like Tarantino, even going a step further in the style of John Cassavetes, by revealing the human ego in crystalline form. My vision was to build the story with such an uncompromising end that the viewer has no choice but to laugh at it all.”

Film producer David Tilšer adds, “I have always wanted to make a film that would entertain people, not only in the Czech Republic, but abroad. I believe Czechs are able to make world-successful comedies, and I am glad that we managed to bring together a bunch of people who see the real and film world with the same eyes. Together we made a dark, bold, and cheeky comedy. Coming Back is a combination of the best modern elements from both Czech and American cinematography ”.

Before the screening, from 18:00 there will be a happy hour with the cast and crew and other industry professionals, with a free welcome drink for all attendees.

Inspired by the space-age, Čezeta’s history started in 1957 at the time of post-war optimism when Czechoslovakia was…

Nearly 130,000 COVID-19 vaccine doses were applied in the Czech Republic by 11 am on Tuesday, which means…

Protesters will gather once again in central Prague on Sunday, January 10, to challenge restrictions adopted to combat…

28 Years Ago, the Split of Czechoslovakia. How People Celebrated It in Prague and Bratislava

On January 1st, 1993, Czechoslovakia split into the Czech Republic and Slovakia. A multi-ethnic nation born at the end of World…