U Fleků, one of the oldest Prague breweries, broke a 177-year old tradition to expand its appeal. In response to the decrease in tourism, it has brewed a light beer called ‘Svatováclavský ležák’ for the first time ever. Since 1843, U Fleků has produced exclusively classic dark beer with a gravity of 13%.

The coronavirus has hit the brewery hard. Half of the staff were laid off, and beer production fell to 15% of the pre-crisis level.

The classic dark beer remains on the menu and dropped in price from 69 to 59 CZK for 400 ml to cope with the pandemic challenges.

If the light Svatováclavský ležák is received well by locals, production will continue. U Fleků is the largest restaurant in the Czech Republic, seating 1200 people. In 1499, it was owned by a man called Kremenec; a name which later which lived on in the street the brewery sits on.

In 1762, the brewery began to prosper under the ownership of a brewer named Flekovsky, which the brewery is still named after.

The original brewery was small- just one building, two stories high. As it grew in popularity in the 18th century, buildings were connected creating the courtyard that you can see 500 years after it opened. 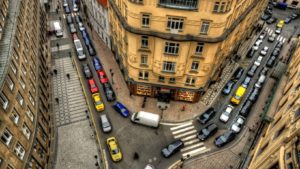