The European Institute for Gender Equality released on 15 October its 2019 Gender Equality Index, showing that EU’s score for gender equality is up just one point to 67.4, since the 2017 edition.

With 55.7 out of 100 points, the Czech Republic ranks 21st in the EU on the Gender Equality Index. Its score is 11.7 points lower than the EU’s score.

Between 2005 and 2017, Czechia’s score increased by only 2.1 points. The country is progressing towards gender equality at a slower pace than the other EU Member States. Its ranking has dropped by four places since 2005.

Sweden continues to top the EU scoreboard, with 83.6 points, followed by Denmark with 77.5. Greece and Hungary have the most ground to make up, with both scoring less than 52. The biggest improver is Portugal, with an increase of 3.9 points, followed closely by Estonia with 3.1 points.

Work-life balance and its connection to gender equality are a special focus of this year’s Index. In the EU, 28 % of women and 20 % of men are ineligible for parental leave.

“As the new EU Parliament and Commission shape and renew EU priorities for the next strategic framework, it is crucial that gender equality gathers speed”, said Virginija Langbakk, director of the European Institute for gender equality.

“Gender inequality is holding Europe back from reaching its full potential. I am proud of what we have achieved, however now our actions need to make a difference on the ground”, added Věra Jourová, EU Commissioner for justice, consumers and gender equality.

The Index is a tool with six-core domains – work, money, knowledge, time, power, and health, as well as two additional domains: violence against women and intersecting inequalities. It gives more visibility to areas that need improvement and supports policymakers to design more effective measures. 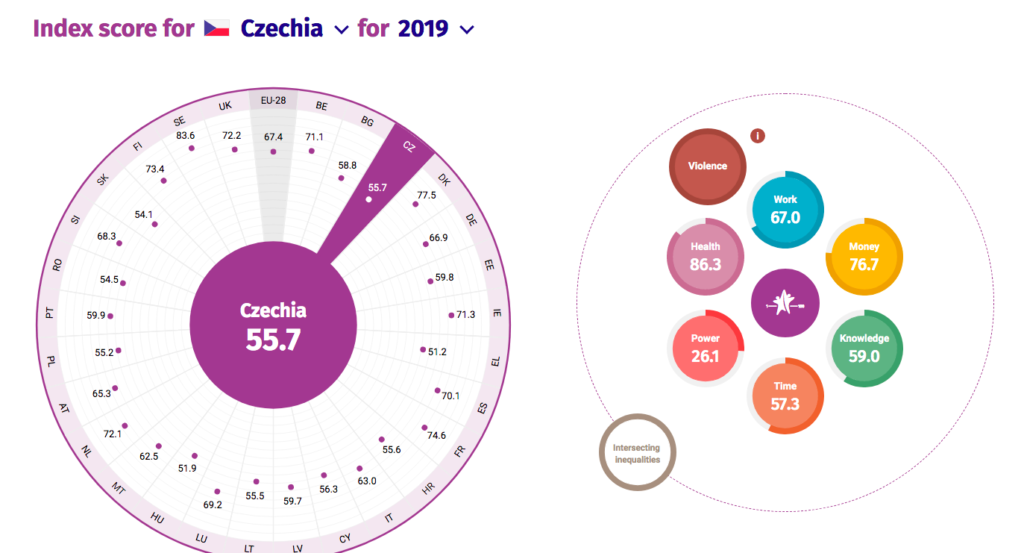 Czech Republic to Test COVID-19 Certificates in Next Two Weeks

According to Czech Television, technical testing of the digital green certificates will start in two weeks, making the…

MEPs on Wednesday approved a new  European Space programme with a seven-year budget of €14.8 billion uniting all…

Since February, Czech Airlines, which has been in insolvency proceedings, is trimming its corporate workforce down to about…

Aged 18 and Older Can Get Vaccinated in July, Minister of Health says

July holds promise for vaccination of the youth, whilst authorities plan a booster vaccination in the near future…

The Chamber of Deputies is considering legalizing same-sex marriage at an extraordinary session. The lower house began negotiations…

Hairdressers to Reopen on May 3

Hairdressers in the Czech Republic are reopening for business, along with pedicures, manicures, spas, and rehabilitation centers on…

The Czech Republic on Friday had its lowest daily COVID-19 case increase since late September. There were 2,587…

Majority of Czechs Perceive Russia as a Threat

Czechs mostly perceive Russia as a security threat to the Czech Republic. This follows from the poll released…

Shops and Services to Reopen on May 3, If Current “Favourable Trend” Persists

All shops, markets and selected services will reopen on Monday, May 3, if Covid-19 numbers continue to fall,…