Czech artist David Černý has started a collaboration for a new project and designed a giant locomotive bridge for Eugen Roden, owner of SEN Development.

The sculpture is inspired by an 1895 train accident at the Montparnasse station. The bridge will connect two houses in Prague’s Lihovarska Street near the former ČKD Kolbenka factory.

“I think the construction will be complete in about two years. The wreck will connect the two opposite houses, so it will be possible to cross it from one side to the other,” said artist David Černý, who co-founded the architectural studio Black n’ Arch.

Černý worked with his colleague, architect Tomáš Císař, on the construction of the wreck. The two high-rise buildings, which will be connected by the train, were designed by Jiran and Partner Architects. The whole project is backed by SEN Development, which leases several other properties in Lihovarská. 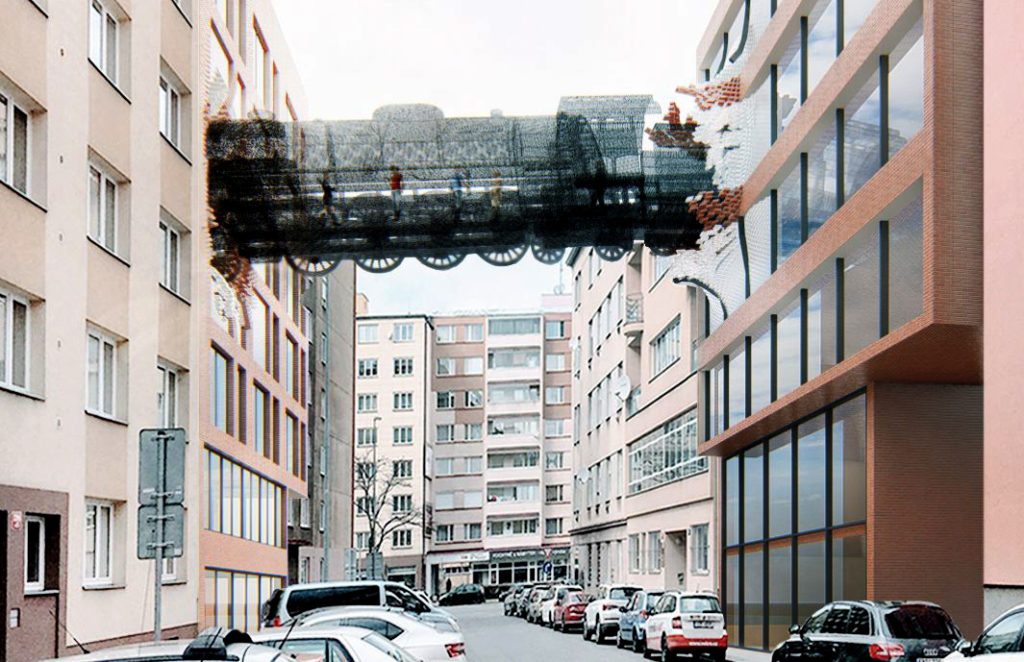 The owner of the property development company, Eugen Roden, plans to set up apartments and offices in the two buildings. Thanks to Cerny’s art sculpture, it will be possible to walk between the two houses and enjoy the view of Kolbenka.

“I wished it was not just ordinary houses, somehow I wanted to recall the history of Kolbenka and its surroundings. David Černý began to play with the idea of ​​returning to the time of industrialist Emil Kolben and the later factory ČKD Lokomotivka. I liked the idea because few remember that over 8,000 locomotives were built in the factory,” said Eugen Roden.

The construction of the wreck was inspired by an image hanging in Roden’s office above his desk. It shows a crash at the Paris Montparnasse station in 1895. The train did not stop at the terminal station, ran through the hall and broke through the glass wall of the railway station.

This is the second sculpture from Black’n Arch Studio to refer to industrial accidents; coming after the massive shipwreck designed for the Top Tower. “Years ago, I had a series in my head called Small Home Disasters. At that time, the Titanic wreck was about two and a half meters wide. The idea was that when one was alone at home and sad, someone was even worse off,” explains Černý.

The management of Prague 9 City Hall supported the project, noting that it captures the industrial history of Vysočany. “We like to see any imprint or reminder of the past in contemporary construction. It not only shows the continuity of life, but it makes the ordinary unusual and interesting,” says Deputy Mayor Marek Dolezal.

The investor is currently waiting for the completion of the construction design. If he gives the green light, construction work could begin this year.