A record number of festival venues, more than one hundred Pride events in Prague and the regions, five hours of online broadcasts daily, rainbow-lit buildings throughout the Czech Republic.

The jubilee tenth edition of the Prague Pride festival will take place from 3 to 9 August and, for the first time in its history, will bring together LGBT+ people and others through the interactive online Pride Stream.

Theme of the festival: Pride LIVE

“Prague Pride connects us LIVE”: this is the main motto of this year’s campaign and the goal of the festival itself. “We wanted to emphasise the theme of interconnection, which is very important to us. We have to get to know each other as LGBT+ people because, for example, the fact that I am a lesbian does not mean that I understand trans people. However, we don’t want to stick only with LGBT+ people, but also communicate with the people around us. The tenth Prague Pride simply has the aim of uniting the whole Czech Republic,” says festival director Hana Kulhánková.

The organising team would like to attract to the programme as many people as possible from all over the country – from LGBT+ individuals and organisations, through the heterosexual public, to partners and people from institutions in the capital as well as in the regions.

The word LIVE was not chosen by accident, as a large part of the programme will be broadcast live online. It will be possible to watch the Pride Stream from festival events on Facebook and YouTube Prague Pride every day from 4:00 p.m to 9:00 p.m.

Every day, the Stream will consist of three sections, Rainbow Fairy Tales children’s programme, educational content comprising lectures and discussions with Czech and foreign guests. The intermissions between the individual broadcasts will comprise a spectrum of a documentary, reportage and experimental testimonials of LGBT+ people with the title Queer Universe.

A programme for truly everyone

This year’s programme includes picnics for asexual people and for bi and pansexual people, and discussion on the portrayal of trans characters in films and games and on intersex issues. Emphasis is placed on bringing together not only various queer groups but also various generations. “As the director of the festival, I consider it very important that older people feel good at Pride and know that it is an event for them as well. The so-called intergenerational snack was a huge success last year, so we decided to repeat it this year,” says Hana Kulhánková.

With respect to the pandemic situation, emphasis is also being placed on enhanced hygiene measures. Therefore, some events will have a limited number of attendees according to current developments and hygiene regulations.

Throughout the week, people will be able to meet outside in the open-air Pride Village on Střelecký Island, where the festival’s Opening Ceremony will take place at 6:00 p.m. on 3 August, in the Pride Sport complex at Žluté lázně and at the Pride Cinema in Kasárna Karlín, where outdoor screenings of films from the Mezipatra and One World festivals will be held.

In the interest of safety, this year’s Prague Pride festival will not have the traditional parade, which will be replaced by the Rainbow Cruise on the Vltava on Saturday, 8 August.

The festival will be held under the auspices of Prague Mayor Zdeněk Hřib, Senator Petr Holeček, Deputy Mayor of Prague Petr Hlubuček, mayor of City District Prague 1 Petr Hejma and Prague City Councilwoman Hana Třeštíková. For the second time, the rainbow flag will fly above City Hall on the first day of Prague Pride (this year on Monday, 3 August).

Tickets for the Rainbow Cruise are available here 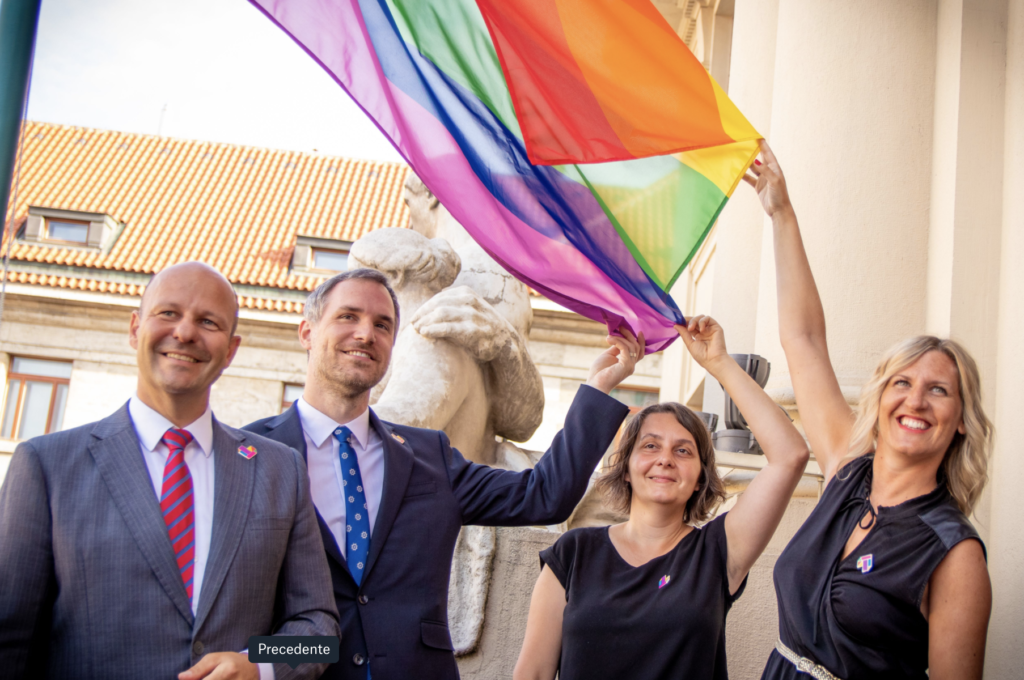