Czech Republic Surpasses Italy and Spain in GDP per Capita

According to the latest International Monetary Fund (IMF) survey, the Czech Republic is ahead of Spain and Italy in terms of GDP per capita.

Although this result is affected by the coronavirus crisis, which has taken a severe toll on big economies, this metric is expected to remain in place even after the crisis ends.

The IMF also believes that within five years, the Czech Republic will surpass New Zealand and Japan and reach 25th place in GDP per capita.

“In Italy, according to the IMF, this year it is 37,905 and in Spain 36,086 international dollars of 2017,” said Trinity Bank chief economist and member of the National Economic Council of the Czech Government Lukáš Kovanda. 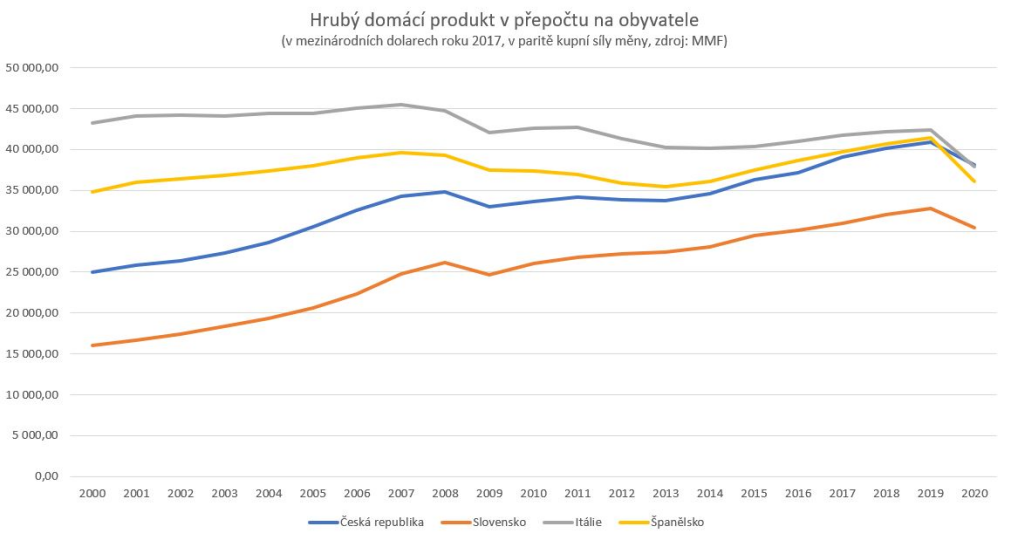 Kovanda explained that the Czech Republic overtook Spain and Italy during the coronavirus crisis of the spring, when both southern countries were hit the hardest.

“The reason is the coronavirus crisis, which in the so-called first spring wave hit Italy and Spain particularly hard. Their economic downturn, including the decline in GDP per capita, was thus more pronounced than the decline of most other advanced economies, including the Czech Republic or Slovakia,” Kovanda told news server Echo24.

The curve shows that the Czech Republic should continue to grow and eventually outgrow the economy of New Zealand and even Japan.

For example, for 2025, the IMF forecasts that the Czech economy will create 45,490 international dollars of 2017 per capita, which moves the Czech Republic two places up over Spain and Italy, which should create 42,809 in the case of Spain and 42,525 in Italy.

“According to the IMF, the Czech Republic should occupy the 25th place in this order in 2025, when it will surpass New Zealand and Japan in terms of per capita wealth. According to the IMF, Slovakia will improve from last year’s 37th place to 36th place in 2027… However, in the years to come, Slovakia will remain not only behind Italy and Spain but also, for example, Portugal, Estonia, and Lithuania,” added the economist.

The Czech economy will grow by 3.8 percent this year and speed up to 4.5 percent next year,…

Czech President Milos Zeman will meet with the leader of the opposition coalition Together, Petr Fiala, at his…

Czech Election: Here’s What Could Happen Next

Babiš: “I Will Stay in the Parliament Even If We Are in Opposition”

Prime Minister Andrej Babiš (ANO) said he would definitely stay in the Parliament, even if his party ended…

With nearly all votes counted, the opposition coalition appears to have secured a slim majority, overtaking Prime Minister…