faUSt, also better known as Faust, was ahead of its time as a West German rock group (in the early to mid-1970s.

They released only four albums, each experimental and distinct from the other, but their last release “Faust IV” is considered for alternative or indie rock musicians and fans their masterpiece.

The 80s-90s alt-rock, psych-rock and post-punk groups that are influenced by Faust, and were proud to say so include Sonic Youth, Pavement, and Nirvana to name a few.

Matching only early experimental Velvet Underground for dissonance and melody, juggled with verve, fragility, and accidental brilliance is one way to describe “Faust IV” released in 1973 on Virgin Records, meaning it was recorded only two years into the Faust experiment. Song lyrics are spoken not sung, and mostly in English with selective German or French songs adding intrigue and helpful for their overall international appeal.

In a wider context, the German music scene in the early 1970s was prophetic in ways beyond the most obvious example, Kraftwerk, which formed in 1969 and is now a more influential group in pop music than the Beatles.

Faust was part of a movement known as “Krautrock” with groups from West Germany, formed in the late 1960s, all flourished in the early to mid-1970s, then they all disappeared. “Faust V” was recorded in 1975, but it was rejected by their label. Unlike its predecessor, “Faust V” is mostly industrial trance or drones with a groove, and ahead of its time like their three other recordings.

A less pejorative and possibly a more accurate term for these groups could be German subversive rock for these bands, which were hardly known (then or now) and especially in Germany, but for those devoted to experimental rock, they forged new sounds and directions for rock music, often with makeshift electronic machines, but which still sounds fresh in the contemporary music scene.

Foremost, they wanted to make a rock & roll genuinely without the influence of British or America’s rock & roll roots (the Blues), and in Faust’s case using the earliest forms of electronic music systems for the oddest and extreme sound effects. The best of the Krautrock groups were Can, Tangerine Dream, Neu Neu!, Amon Duul II, Ash Ra Tempel, and Faust, formed in 1971 in Wumme, Bremen.

The current line-up for the performance of “Faust IV” in Prague features only the original member Peron, with long-time collaborator Amaury Cambuzat (from the French post-rock group Ulan Bator), Pierre Chevalier and Didier Demeestere; and there is a promise of other sonic-sound surprises.

faUSt is a dedicated cabal of veteran European sound explorers, led by Jean-Hervé Peron, their guide.

The concert is organized by Rachot. In case of any questions, reach out to them directly at info@rachot.cz. 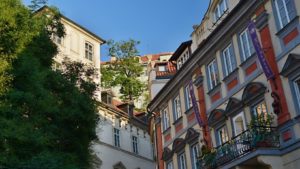