France has become the first EU member state to begin testing a digital coronavirus travel certificate as part of a Europe-wide scheme that Brussels hopes will allow people to travel more freely within the bloc by the summer.

The TousAntiCovid app, part of the country’s contact tracing program, has been upgraded to store negative Covid-19 test results on travelers’ mobile phones and is being trialed on flights to Corsica and overseas départements from this week.

The app has so far been downloaded by nearly 15 million French citizens so far.

When will it be ready for use?

According to a French official, at first, the certificates will only be used for travel, but they “could eventually be adopted for public events such as concerts, festivals and trade fairs,” although not for bars and restaurants.

First, the system will be tested on flights from the mainland to Corsica, then to other overseas territories in the coming weeks.

How will it work?

Currently, through the app, people who have been tested for the virus with an antigen test or RT-PCR will receive an SMS or an email that enables them to connect to the SI-DEP and retrieve a certificate in the form of a PDF. Among others, the certificate will include a QR code.

Starting from April 29, similarly, it will be possible to retrieve the vaccination certificate via the Ameli health insurance portal.

According to the French Directorate General of Health (DGS), the police, customs and airlines will be equipped with an application to read the DataMatrix, called TousAntiCovid -Check

“During a check, no health data is stored by the TousAntiCovid-Verified application, it simply checks the signature of the certificate with the server, which sends back a red or green signal,” the DSG said in a press briefing.

The EU Commission introduced its plans to create the so-called Digital Green Certificate last March in an attempt to make it possible for vaccinated persons, those who test negative, and those who have recovered from the virus, to travel without restrictions. 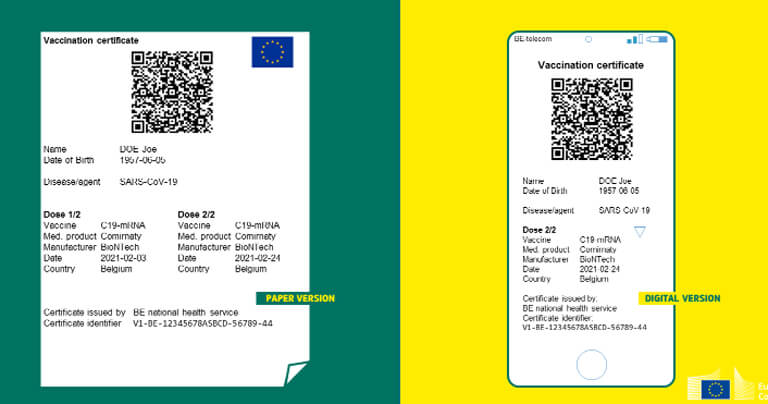