On the morning of May 27, 1942, around 10:30, two men, Jozef Gabčík and Jan Kubiš, waited in the sharp bend of a road near the Bulovka hospital in Prague 8. Bicycles parked nearby for an escape and one wearing a long coat to conceal his machine gun. These men were waiting to ambush one of the key men of the Third Reich, the butcher of Prague, Reinhard Heydrich.

Planned by British special operations and supported by the Czechoslovak government-in-exile, the preparation for Heydrich’s assassination called Operation Anthropoid involved officers Jozef Gabčík and Jan Kubiš as the major players. They were airlifted from Great Britain to Czechoslovakia along with seven other Czech soldiers in December of 1941. After scratching plans to kill Heydrich on a train and in his car in a forest, the plan was to attack him at a sharp turn in the Libeň district of Prague on his way from his home in Panenské Březany.

Gabčík and Kubiš were positioned at the tram stop near Bulovka Hospital where there was a bend in the road while their colleague Josef Valčík signaled with a mirror the arrival of Heydrich’s open-roofed Mercedes Benz. Gabčík jumped in front of the vehicle, but his Sten gun jammed.

Heydrich had his car stopped and tried to shoot Gabčík when Kubiš hurled a grenade. Although the bomb only hit the rear wheel of the car, Heydrich suffered a broken rib, ruptured diaphragm and splinters in his spleen, and Kubiš was injured as well. The explosion shattered the windows of a tram as shards of glass maimed passengers. Though severely injured, Heydrich tried to chase Gabčík but soon collapsed.

The driver Klein raced after Kubiš, but his gun jammed, and the resistance fighter got away. Following Heydrich’s orders, Klein then set after Gabčík, who hid in a butcher’s shop. The owner, a Nazi sympathizer, revealed his hideout to Klein, who collided with Gabčík in the shop. The assassin injured the driver in the leg and scurried away to safety.

The 38-year old Heydrich was taken to nearby Bulovka hospital where he died June 4 at 4:30 am. 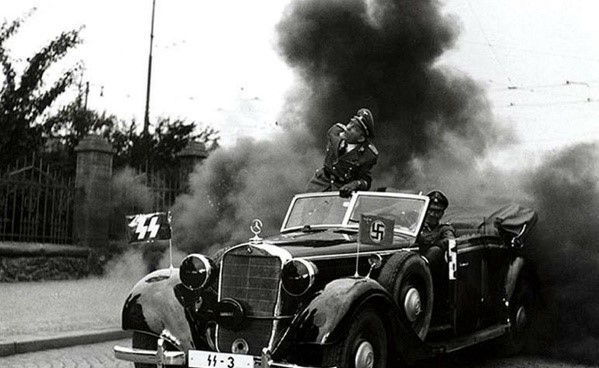 A group of the paratroopers numbering beside Jan Kubiš and Josef Gabčík another 5 members needed to find a suitable hiding place for the attack. It was provided to them in collaboration with the home non-communist resistance movement by Jan Sonnevend and the Orthodox priest ThDr. Vladimír Petřek in the crypt underneath the Church of Sts. Cyrillus and Method in Reslova street. Despite extensive German search for nearly one month the hiding place of the paratroopers remained undiscovered, it was not given away by the Czechoslovakian citizens.

They had not surrendered to the enemies. The Orthodox bishop Gorazd, Reverend Petřek, Čikl and brother Sonnevend, another 9 executed Orthodox believers from the church and 265 collaborators of the resistance movement were executed for complicity and help to the paratroopers.

The story of the mission to assassinate Heydrich has been told on film several times. In 2016 the film Anthropoid by writer-director Sean Ellis starred Cillian Murphy and Jamie Dornan, along with Czech actors. It was shot on Prague locations.

@PragueMorning
72 Following
3K Followers
📱 Placehunter is a mobile app where you can find around 150 unique places to see in the Czech Republic.… https://t.co/7SOWKF9XO2
about 1 hour ago
Follow