František Kupka’s painting Divertimento II was sold for 90.24 million crowns including an auction surcharge at today’s auction in Prague, which is a new Czech auction record.

Until now, the record price paid at the domestic art auction was 78.65 million crowns for the painting Queen of Spades by the painter Toyen, which was sold in October this year.

Divertimento II is one of the most important works of his abstract period of the 1930s. The name Divertimento is associated with Italian musical terminology and refers to a light-hearted or entertaining instrumental composition. Music, of which Kupka was a great admirer, was incorporated into the painter’s early works and was later repeatedly transformed by him into a play of lines and shapes, into mechanisms whose emotional effects create a deeply sensory experience, reflected in the very name of the works.

The painting brings ingenious intersections of circular surfaces and their various overlapping sections, through which especially a distinctive black curve penetrates, which acquires circular shapes in its bends. Kupka thus excluded any orthogonal relationships from the painting, settling for rounded sections, each of which he gave one angled, monochrome colour.

The painting is firmly connected with Divertimento I, which is now in the collections of the Guggenheim Museum in New York, and with a pair of Hot Jazz paintings (I and II, 1935), to which both Divertiments are linked. 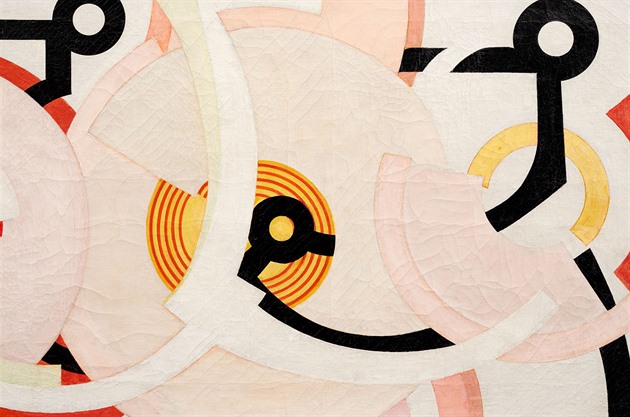 František Kupka, a Czech painter, and graphic artist, was born in the small town of Opočno in eastern Bohemia in 1871.

He is known as one of the pioneers of Abstract Art and Orphism, which helped evolve Cubism into Abstract Art, a movement more concerned with expression and sensation through color, music, and form. Kupka studied at the Prague Art Academy from 1889 to 1892 where he experimented with patriotic and historical themes; he then moved to Vienna and became interested in symbolism and allegory painting.

After Vienna Kupka moved to the art capital of Paris where he studied and worked as a book and poster illustrator. It was around this time that Kupka became inspired by the Futurist Manifesto by the Italian poet Filippo Tommaso Marinetti, which was published in Le Figaro in 1909.

Kupka continued to paint and exhibit and in 1931 was a founding member of Abstraction-Creation, a group of Paris-based artists who wished to counteract the popularity of Andre Breton and his Surrealist movement.

In 1936 Kupka showcased his work at an exhibition titled Cubism and Abstract Art at the Museum of Modern Art in New York City. In 1946, Manes Gallery in Prague held a retrospective of his life’s work.

Kupka’s work can be viewed at the Kampa Museum, where you will find an extensive collection, and at the Veletrzni Palace.

@PragueMorning
71 Following
3K Followers
📈 The health ministry recorded 14,457 new COVID-19 infections on Thursday, up from 11657 cases a week earlier. Curr… https://t.co/7lhl2byVNK
12 hours ago
‼ The Czech government wants to introduce a ban on movement between regions (with some exceptions, such as travel t… https://t.co/BlNJmJFkFK
23 hours ago
Follow