“Overall, how satisfied are you with your life these days?” people across the European Union (EU) were asked. Life satisfaction represents how a respondent evaluates his or her life taken as a whole.

The average life satisfaction of EU residents aged 16 and over was 7.3/10 in 2018, an increase compared with 7.0/10 in 2013, according to Eurostat, the statistical office of the European Union.

Finnish were the most satisfied with their lives in the EU, closely followed by Austrians, Danes, and Poles. The Czech Republic finished in tenth place with 7.5 points, ahead of Germany, Spain, and France.

Highest satisfaction with the financial situation in Denmark, Finland, and Sweden

Mean satisfaction with the financial situation of the household varied significantly between the EU Member States. With an average of 7.6, inhabitants of Denmark, Finland, and Sweden were the most satisfied with the household financial situation. They were followed by those in the Netherlands (7.4), Austria (7.3), Belgium (7.0), Luxembourg (6.9), Germany and Malta (both 6.8).

At the opposite end of the scale, residents in Bulgaria (4.3) were by far the least satisfied, followed by those in Greece, Croatia, and Lithuania (all 5.2), Latvia and Portugal (both 5.4), and Hungary (5.5).

In nearly all Member States for which 2018 data are available, the mean satisfaction with the financial situation increased compared with 2013, with the exception of Denmark, Luxembourg and the Netherlands where it remained unchanged, and Lithuania where it decreased from 5.8 in 2013 to 5.2 in 2018 (-0.6). 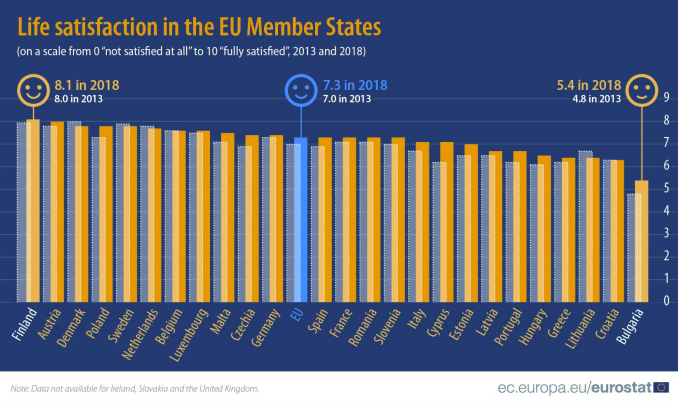 Wearing Masks Everywhere Outside no Longer Mandatory from Monday

As part of the next step of loosening of restrictions, the government will abolish the obligation to wear…

Restaurant Gardens to Open From May 17th

Studying in Czechia and About to Graduate? Here’s What You Need to Know

The Czech Republic has become increasingly more popular with international students from all corners of the world. This…

On Monday, May 10, all closed shops and several services can reopen after a few months of closure.…