The 15th-century Powder Tower in Prague centre will undergo a thorough reconstruction of its coating to remove its later black finish.

The general restoration of the coating is to return the tower its original appearance, such as the brown colour of the facade, from the period of the Neo-Gothic adjustments by architect Josef Mocker in the 1880s.

The current black colour dates back to the 1960s or 1970s when it was to cover different colours of the stones from various periods, the document to be discussed by the Prague Assembly’s culture committee says.

The facade of the tower is in a disastrous state due to climate influence as well as the poor-quality repair works in the 1960s and 1970s, the document writes.

The research is mainly to divide the original Gothic stones from their later replacements in the 1880s. A laser scanning of the facade is to be carried out in the first half of this year.

The Museum of the City of Prague, which operated the sight, plans to repair the floor on first storey of the tower where a display on the Prague fortifications development is to be installed. 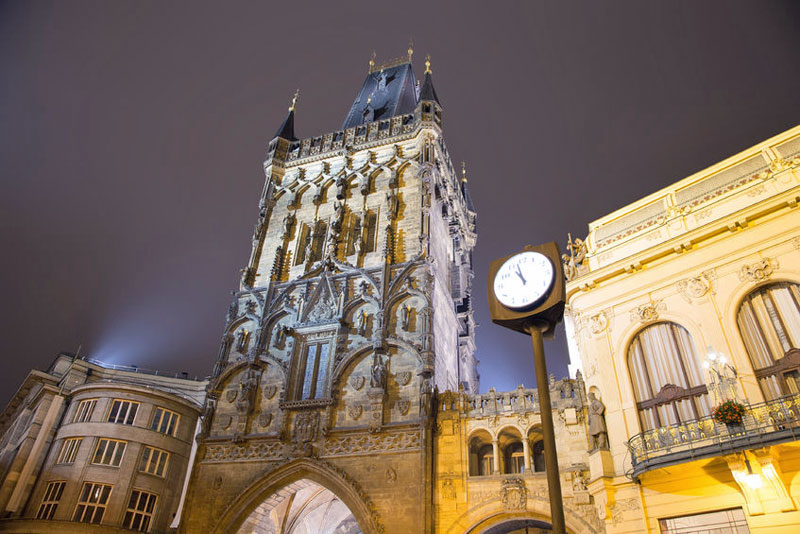 “Powder Gate” (“Prašná brána” in Czech), is among the most amazing and treasured sights of Prague and is considered to be one of its symbols. It marks the beginning of Celetná street, part of the “Royal Way”.

This route, leading through Prague’s historical centre and connecting the former Royal Court with Prague Castle, was a significant part of Czech kings’ coronations. Ceremonial processions took the Royal Route on their way to castle.

The history of this tower started in 1475 when King Vladislaus II of Bohemia and Hungary personally laid its cornerstone within the main fortification of the Old Town. The act was immortalized with writings on the tower’s moulding. The following words can still be found on the western side of the tower: “Behold the great building, founded with the hands of the high king Vladislaus, born of noble blood of dukes and emperors.”

The Powder Tower is basically a gate that separates Prague’s New Town from the Old Town. Back in the 11th century, it was one of the 13 gates through which Prague’s citizens could enter the Old Town.

The gate was used to store gunpowder in the 17th century and hence its name.

@PragueMorning
71 Following
3K Followers
ℹ️ The government announced a new series of measures “to prevent a total collapse of our hospitals. If we don’t do… https://t.co/Bt4d1Y4Mtj
7 hours ago
Follow