Traveling in Europe: What Is Going to Change From Monday, November 9

The traffic light system of travel has been updated for the first time since September.  The rules will come into effect from November 9 and will apply to both Czechs travelling abroad and foreigners coming to the Czech Republic.

Foreign Minister Tomáš Petříček announced the change, showing a map of with countries coloured in red, orange or green depending on their Covid infection rate. Countries with less than 250 cases per 100,000 people in the last two weeks, where more than four per cent of tests are positive, are classed as medium risk, i.e orange. The entire of Europe is currently flooded with orange and red.

The only exception will be Vatican City.

According to Petříček, efforts have been made to establish uniform rules for travel within the European Union since the spring. With this system, there are still changing rules. For example, twelve-hour trips abroad are allowed without the need to take a test.

When traveling to the Czech Republic from these countries, only foreign workers, with the exception of commuters, will have to submit a negative COVID-19 test. They will not need other tests.

For countries with a high level of risk, specified by the colour red, anybody entering the Czech Republic will need to produce a negative Covid-19 test. If they can’t, they need to quarantine for 10 days.  They must also fill in an arrival form to provide details of where they are staying. Exceptions to this requirement are commuters or students who move regularly.

Still, the Czech Republic is accepting entry of people from Singapore, Japan, South Korea, New Zealand, Thailand and Australia without tests or quarantine. The data will be re-evaluated each week and, in the case of a change, the map will be updated on Fridays.

The map will be updated once a week. 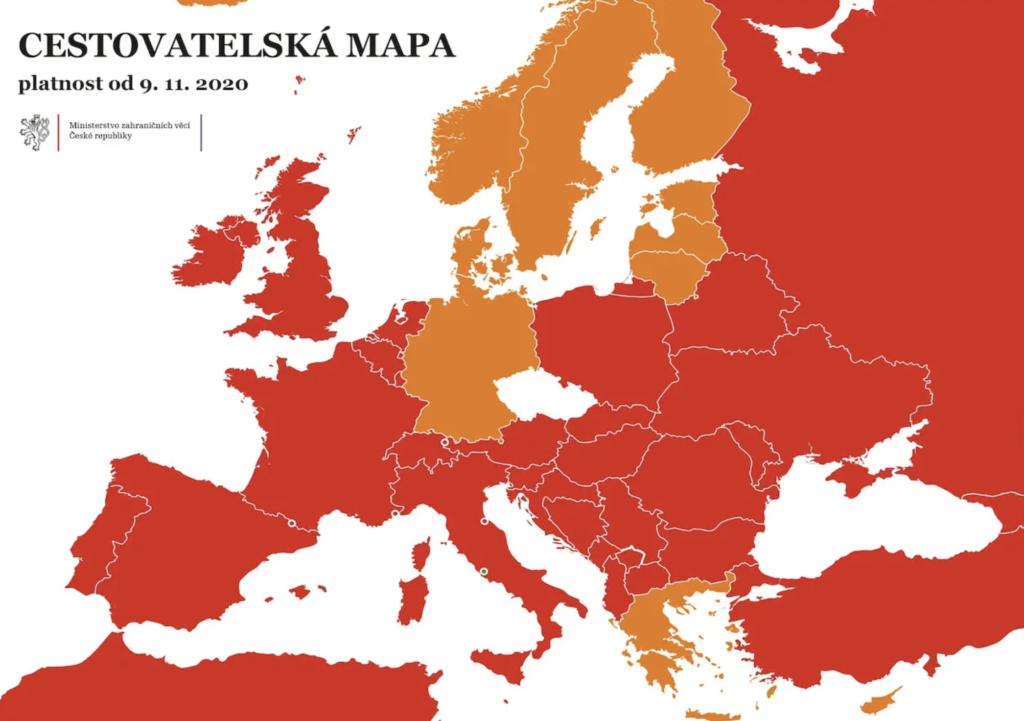 IATA Expects to Roll Out Covid Travel Pass ‘Within Weeks’: All You Need to Know

The IATA sees the digital travel pass, a mobile app developed by the association, as an essential tool…

On Thursday, 18 February, RegioJet opened ticket sales for its summer night service to Croatia. The train will…

Antigen Tests Will Suffice From High-Risk Countries Until February 14

For arrival in the Czech Republic from countries with a high risk of infection – including Slovakia, Britain,…

RegioJet to Renew Long-Distance Train from Prague to Croatia

The Czech Republic Closes its Borders for Foreigners

The Czech Republic will close its borders, including those with Slovakia, for all foreigners at midnight between Friday…

“Our annual flight schedule is being revised, we are still working on it,” said the airline’s spokeswoman Olga…

Throughout the course of 2020, a total of 3,665,871 passengers passed through the gates of Václav Havel Airport…

The city of Prague has thrived on tourism to prosper; however, the impact made by the pandemic in…