This “internal” architecture of Prague’s centre is a fascinating display of wonderful works by famous designers and it has a great impact on Prague’s unique appearance.

Prague’s passages were mostly emerging at the end of 19th century, mainly in the city’s centre.

1) LUCERNA, ROKOKO AND U NOVÁKŮ

These three passages that are just a few steps off busy Vodičkova Street have turned the entire block into Emmental. Bump into parents escorting their offspring to a cinema matinée, teenagers about to attend their prom, or rockers heading to a live concert. Look for Saint Wenceslas sitting on a dead horse.

2) SVĚTOZOR AND U STÝBLŮ

These two interconnected passages could not be more contrasting – while Světozor swarms with cinema-goers, ice-cream and sushi-eaters, U St.blů has hardly any cultural life left.

Take a break there and look up to appreciate the 1947 Tesla mosaic advert (!) and the light that falls in through the glass brick ceiling.

Located at the bottom of Wenceslas Square, is the Art Nouveau Koruna Palace. Notice the top of this interesting building; a golden crown of pearls sits perched atop of the gray structure, surrounded by massive muscular statues hauntingly acting as sentinel to the palace.

A unique place devoted to the presentation of Czech design can be found in the passage of the Czech National Bank, which itself is also an architectural gem. The project was inspired by Paris, Berlin and Brussel and the place functions not only as an exhibition area for young art and design but also as a meeting point for authors with public or a venue for workshops.

The exhibitions are modified every three months and there are continually presented distinguished as well as young talented artists.

Fronting the eastern end of Jungmannovo náměstí is an imitation Venetian palace known as the Adria Palace. Its distinctive, chunky architectural style, dating from the 1920s, is known as ‘rondocubism’. Note how the alternating angular and rounded window pediments echo similar features in neoclassical baroque buildings, such as the Černin Palace in Hradčany.

Wander through the arcade for a look at the lovely marble, glass and brass decoration. The main atrium has a 1920s 24-hour clock flanked by sculptures depicting the signs of the zodiac, which was once the entrance to the offices of the Adriatica insurance company (hence the building’s name).

The Myslbek Shopping Gallery is a passage between the New and Old Town connecting the busy street Na Příkopě with Ovocný Trh.

The Myslbek building, opened in 1996, received its name after the famous sculptor Josef Václav Myslbek. On the facade of the building on Na Příkopě Street you will find a remarkable metal gate from stainless steel weighing 8 tons. Its two gigantic sliding wings, symbolizing the gate between the Old and New Prague, open every morning and after the closing hours of the shopping gallery they close again.

The second gate, designed by Czech sculptor Karel Nepraš and leading to Ovocný Trh is interesting because of the bronze heads adorning it. 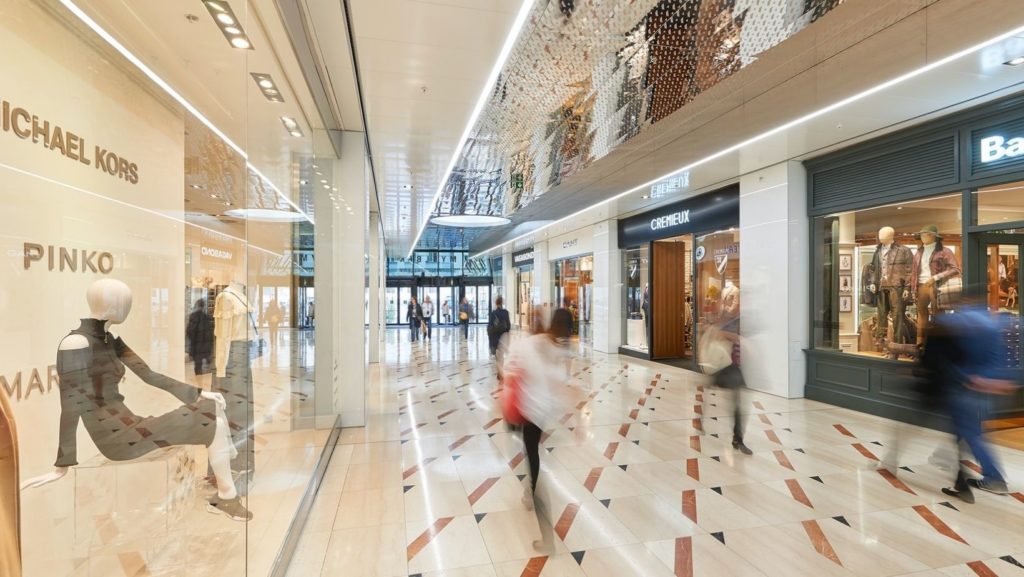